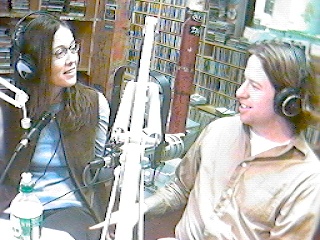 Gladshot return to WMFO to promote their show at The Kendall Cafe, Janurary 2003.

Because Tufts University students were not in session, I had a double show this week. The first half of the show, I played my "Tops for 2002" set, selected tracks from the list at the very bottom of this post. After that, I pulled a bunch of new music from the bins and rocked out for an extra two hours in an "Extended Version" set. The lists of tracks and selections are below.

Wednesday, January 01, 2003
Posted 10:39 AM by anthony
“Taste the Floor” Radio Show Tops in 2002 list
Here are some of the best music releases of the last year which I have featured on my radio program heard every other Thursday from 1 to 3 p.m. on WMFO 91.5 FM in Medford.

The Apples in Stereo — “Velocity of Sound” — A great pop album filled with big hooks and crunchy guitars. Every song on here is a winner and I was happy to play many of them. I only wish I got to see them live when they played the Roxy.
Astroblast — “This Will Help You on Your Way” — Some of the best noise pop/space rock out there from this Texas-based band. The songs are uplifting and dynamic, the effects are loud, and Jenn is a charm. I hope to hear more from this band in the future.
The Black Watch — “Lovestruck” track — A great pop tune. Period.
Bratmobile — “Girls Get Ready” — I fell in love with this riot grrl trio back in the old days when they released the “Kiss & Tell” single. Years later, they are still churning out beautiful, blasting lo-fi punk. Excellent.
Chao — “Gotta go” track — A show closer for weeks and weeks.
Maggie Connell — “The Luxury of Sadness” — This one is hard to describe but it is an absolutely brilliant record. Maggie is a jack of all trades on this one and masters many different styles of music from performance art rock to pure pop.
Devil Doll — “Queen of Pain” — Oh my, oh my. Where the hell did this come from? Colleen Duffy sings her heart wrenching — yet rocking — tunes of loves won and lost in almost every style imaginable. So often in this industry, you hear someone with real talent or a knack for a hook but they never get anywhere. Someone please, don’t let this girl waste away on the Sunset Strip!
The Flaming Lips — “Yoshima Battles the Pink Robots” — A very mellow collection and not as good as past efforts from these purveyors of acid punk. However, anything by The Flaming Lips is still better than most bands out there.
Gladshot — “Relic” — Very good power pop from this NYC duo who drove all the way up to Boston to play my show in March. See the Web site for a quick pic. This one has nice strumming, nice humming, and nice keyboards. A gem.
Goo Goo Dolls — “Gutterflower” — Okay, so music snobs don’t like this band and some are probably surprised to see this CD here. But the Goo Goo Dolls are one of the only good mainstream bands around today. This hook riddled record is a lot of fun.
Grandpa Boy a.k.a. Paul Westerberg — “Mono” — While his “Stereo” release gave us many of the heartfelt Westerberg tunes we have come to love, the Grandpa Boy disc of this two CD set was the smash-em-up kind of stuff that made us fall in love with Westerberg in the first place!
Tami Hart — “Trapped in your blood” track — This is what punk was supposed to be about.
Blake Hazard — “Little Airplanes” — North Shore label Kimchee Records put out some of the best local stuff this year. Blake’s “Little Airplanes,” guided by lo-fi guitar guru John Dragonetti a.k.a. Jack Drag, was a stellar pop record. Can hardly wait to hear the next one.
Jabberpony — “So Far” — This New Jersey quartet plays jazzy folk pop with nice vocals and do-it-yourself attitude.
Lava Baby — NYC-based new wave pop quintet’s “Big Muff” was released twice last year and received airplay both times. A very enjoyable album.
Lords of Acid — “Scrood Bi U” track — A trivial masterpiece. Sluts rule.
Mary Lorson & Saint Low — I loved the first two Madder Rose records which I played to death when they came out. The new release from Mary Lorson was a bit on the moodier side but still exciting and pleasurable.
Jana McCall — “Slumber” — A very mellow but stimulating album from a former member of the punk band Dickless. A surprisingly beautiful collection of tunes.
Merrick — “Merrick” — Great indie pop record from the daughter of a guy from Little Feat. This record is much better than anything her dad’s band did. Unfortunately, the band broke up recently.
Midnight Oil — “Capricornia” — Probably the last release with amazing front man Peter Garrett but keeping with the fine Oil's tradition of full melodic structures and powerful prose.
Mistle Thrush — “Drunk with You” — After a short hiatus with lineup changes and bouts with labels, the Thrushies burst back onto the Boston scene with this collection of great songs. Well worth the five year wait.
Josh Rouse — “Feeling no pain” track — A numbing jaunt into pop bliss.
27 — “Animal Life” — Maria Christopher was one of Boston’s mesmerizing talents in The Dirt Merchants. Fronting 27, she is mature, poetic, and masterful. They have everything you could possible want in a band. The album was so good I decided to play the whole thing in its entirety on one show.
Wilco — “Heavy metal drummer” track — Quirky reality seeps in again and commercial radio belatedly picked up on this band. A great single.
Yeah Yeah Yeahs — “Yeah Yeah Yeahs” EP — Almost as powerful a debut as The Jesus & Mary Chain’s “Psychocandy” back in 1985. Almost, that is.
Posted by Tony at 6:40 PM
Newer Posts Older Posts Home
Subscribe to: Posts (Atom)